One of the more well-known drawbacks of AX 2009 is the lack of user security reporting. For privately held companies, this can be an issue, but one some may be comfortable overlooking. For a publicly traded company, this problem is expounded, as auditors will often demand some kind of documentation that users cannot get access to cross-functional responsibilities that would violate Segregation of Duties policies. Without third-party tools, this reporting normally means that the auditor in question would run the User Permissions report for the users, and compare that with a document that organizes what access a user must have to do a particular task. Normally this is a long, tedious and expensive process, which is done at least once a year.

To help combat this process, we created a reasonably simple report which does this automatically. By making the system check for permissions, we have reduced errors in these types of checks significantly and can get this information very quickly and reliably.

At the core of the report, there are two populated tables: one of the tables holds a list of all the functions we want to test for, while the other table holds what elements should be checked for each function. Since most functions actually need multiple permissions together to be able to work correctly, there is a 1:n relationship between these tables. For example: 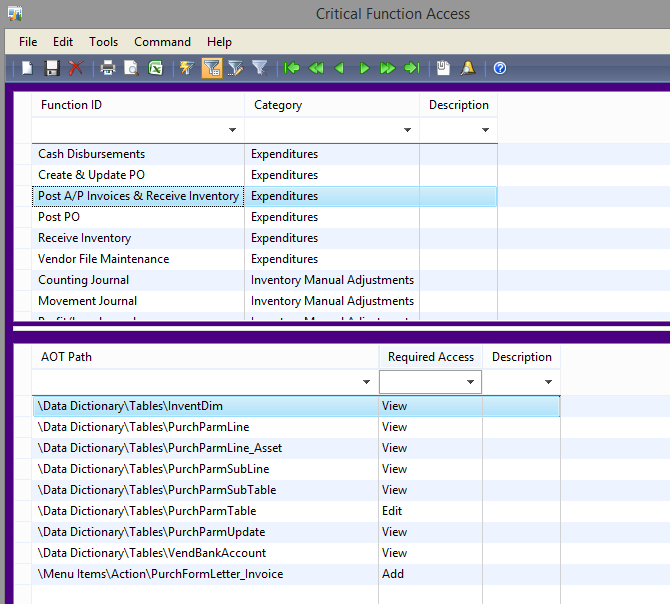 The Category column is simply a way our auditors prefer the functions to be grouped. Additionally, each security element needs to be identified by the actual AOT path. For the purposes of this report, all table access is governed by the table itself, not by the permissions on individual fields.

Once the information is populated, the primary class is executed.

The report itself is generated directly to Excel, because the system can be set up to have any number of functions, and test any number of users for those functions. In addition, it is run for every company, creating a new tab for each one. In our case, we have a domain that contains all of our active companies which drives what companies the report will run for (“Prod”, which is referenced a couple times in the code). Various methods are included to help easily manage the Excel side of things so we can focus on the more important part: determining access.

The heavy lifting is of course done by the Run method, which loops through each function and hands off to to the permissionForFunction method. This method, in turn, loops through the definition of the function and passes each AOT path to the permissionForElement function, which tells what level of access (if any) the user has to that particular AOT node. If at any time the permission for the AOT node falls below the required level for that node, we short-circuit a “No”, which keeps the system from having to check every node for every user.

Finally, once we know if the user has access or not, we print the answer to the appropriate Excel cell. When the spreadsheet has been completely populated, we make the application visible and end the task.

This relatively simple report makes it easy to add or remove what we term Critical Access areas, which are generally SoD compliance type functions, but it could be used for other things as well. Since everything is run on-demand, and against the user’s actual security, we can be sure that so long as the definitions are accurate, the report will also be accurate, and the results can be examined in minutes instead of days.