I’m going to skip what really should be my next post in the Automated Builds and Code Deployment series (which should be about how code is promoted from Dev -> Build -> UAT -> Staging -> Production), and instead write about the reverse process, which I will be referring to as flowback.

Because we are still working through our own implementation of automated code deployment, we decided to implement the flowback before the promotion, since it would help with our existing manual promotion strategy. Once the promotion architecture is all set up, we can adjust the flowback processes as necessary, which will be fairly minor.

To manage our flowback processes, we are again using TeamCity. We are running TeamCity 8, and taking advantage of a new feature that was not present in version 7: Templates. Templates are a base build configuration, with steps, triggers, conditions, dependencies, parameters and requirements defined. When you create a new configuration based on a template, you are not able to delete anything that is defined in the template, but you can add additional attributes or change some of them. It is important if you want to use templates that not everything can be overridden. If in doubt, assume the template will override any settings on the configuration.

We’ve hooked our flowback template to be based on the same VCS repository that was mentioned in the previous post. This repository holds all the script files necessary to operate every aspect of the project: Build, Promotion and Flowback. We have it organized so each server has its own folder. If the server has both a promotion and a flowback process (Build in this case), it has a Promotion and Flowback folder as well. This structure will become helpful in a moment.

Our production server still has a few operations that are run outside of the managed build process. Because we don’t want to bring the production server offline every night to copy the binaries, we use a tool that takes a Shadow Copy of the files, and moves them on to a central network location. In addition, the production SQL database is backed up to the same location. Our managed flowback process will use these files to restore the environments.

Here is an example of what one of our steps look like: 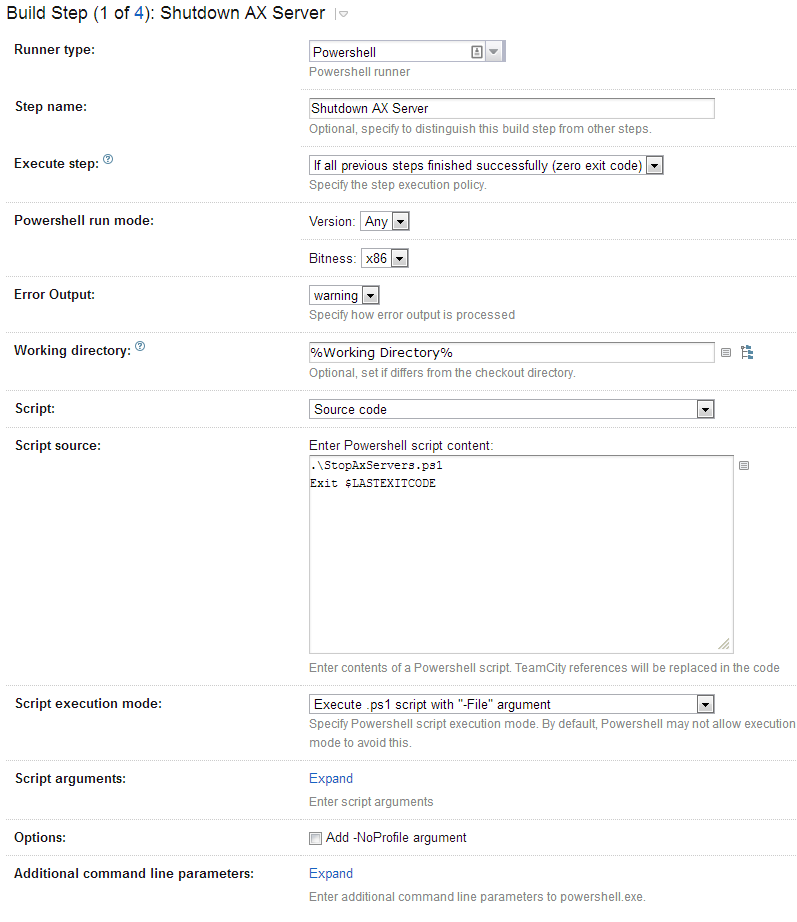 You will notice the script name is hardcoded into the step (in this case ‘.\StopAxServers.ps1’). This is where the VCS folder structure comes in. In our template, we define a build parameter: 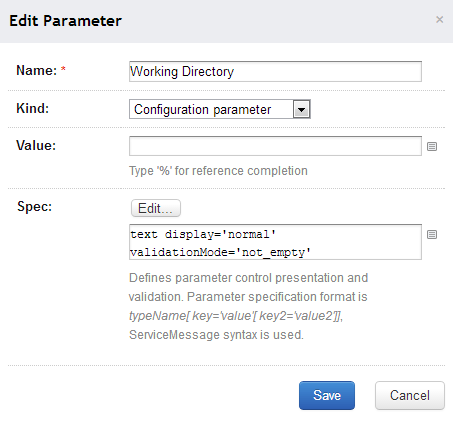 We do not specify a value on the template itself, we simply declare its existence. When a new configuration is created, it will prompt us for the value of this parameter, and the configuration will not run without it. The value is the relative path of the scripts in relation to the VCS root. So, for our Build Flowback, the value will be ‘Build/Flowback’; for Build promotion to UAT it will be ‘Build/Promotion’; for Dev flowback, it will simply be ‘Dev’. Each flowback process has identically named files, with only the script commands changed as needed to reflect the different environments.

Since each flowback process should be identical except for a couple key variables (namely the destination server name), this makes things much easier to manage. If, in the future, we decide that all flowback processes should have another step, we simply add it to the template, ensure the new script file is in the correct directories and it will automatically show up the next time the configuration is run.

Each step in the template calls a single file:

The script is set up to have the items that change (the hostname and file locations) at the top, and use them throughout the rest of the script. Feel free to adjust it as needed. Because of a bug with powershell scripts in TeamCity, it’s difficult to capture any errors that occur. The osql command (with the -b flag) allows us to check the result of the SQL command and issue messages back to TeamCity. Depending on the command, it could fail the build (failing to restore the database will cause an error, but if we can’t shrink the database it’s not a big of a deal so we only issue a warning).

The SQL Clone Script referenced is separate SQL file. The purpose is to fix URLs, user permissions, etc so the server operates correctly. This is a sample of our script (note: This is for AX 2009; this may not work in 2012 because of database schema changes):

In addition to modifying user settings and permissions, we also manage things like 3rd party plugins that should be pointed to different environments, and obfuscate certain information that should only be readily available in production. We also have a modification in our system that allows us to change the background of the windows on a company-by-company basis to easily identify which environment/company you are working in. When this script is run, the color is set to Red across all companies (Dev is Purple, Staging is Green, UAT is orange).

When the server is finally started back up, everything is repointed to the development settings, and it now operates independently of production as it should.